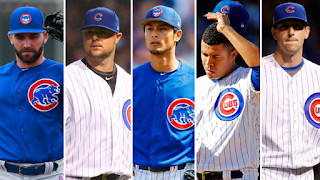 No report cards this year for individual players, just a long hot take on this year's team and performance. I know I retired FH but I only write 1 Cubs post per year and it was really close so I'll do it.

The other reason is that, this year, I've had to listen to a lot of podcasts. I only listened to the Cubs Talk Podcast last year. This year I added Locked on Cubs and it was just those two until Locked On did not update for a week and I thought it had been abandoned. So I added in Cubs Related, Away Games and Wrigleyville Nation's Podcast. For the record, here is my ranking:

Even though it is the only one sponsored by a major corporation, they still sometimes maintain a very DIY feel, such as commenting on the ambient sounds of a lawnmower on the field during recording after a game. They also quoted Jon Lester last night even though it was NSFW: "You need to get your dick knocked in the dirt to appreciate where you're at. Maybe we needed that, maybe we needed to get knocked down a peg or two and realize nothing's going to be given to us." Highlight from year: Doug Glanville commenting on A-Rod commenting on Yu Darvish.

Only because they were pretty consistent M-F and stuck to a set format and were relentlessly depressing. Total debbie-downers but I loved them for it. This should be the default setting for true Cubs fans. Optimistic Cubs fans are not real Cubs fans. Highlight from year: playing old clips of 5 biggest home runs (Glenallen Hill rooftop shot was #1)

By far the most humorous on this list, I didn't start listening til the end. They did it about once a week. They both come off as likable and they usually make good points but you couldn't listen to it every day as a substitute for watching or listening to the game itself, which is the main reason I listen. Highlight from year: telling Theo & Jed to sign Jesse Chavez and Cole Hamels today to maintain positivity.

This was the most long-winded on the list. Episodes had longest running time and driest tone. It may have been updated just as frequently, if not more so, than Locked On. Hosts had good chemistry. Occasionally hilarious, and also relentlessly depressing. Highlight from the year: host nonstop crushing on Jon Lester.

I only listened to 2 or 3 episodes of this pod and no shade on it (because in the 2 episodes I've recorded so far of the Flying Houses podcast, I sound like a junky) but the host always sounded kind of a drunk, like he had just gotten back from the game more than a few in the bag and recorded. Maybe he's always been totally sober and I'm way off base here and I'm only mentioning it because I don't know what else to say about it. They did have good guests. The host seemed more like a moderator for the guests, at least in the last episode. Also recorded once a week. Highlight of the year: breaking the news about Russell being placed on leave (breaking for me, 3 days later).

These podcasts have changed the way I watch and talk about the Cubs. For example, the only things anyone seemed to care about near the beginning of the year were rumors about acquiring Manny Machado or Bryce Harper. Then it was always about Yu Darvish.

One of the big storylines of the year was that the Cubs spent about $200 million on 3 pitchers that turned out to be busts. OK not true about Brandon Morrow. He is one of my favorite players on the team and performed admirably when he was not injured.

Tyler Chatwood and Yu Darvish should not be lumped in with one another. Yu was injured and Tyler had a control problem (which seemed almost Mark Wohlers-esque). Yu will get another chance next year and Chatwood may not.  Regardless, fans liked Chatwood for his attitude. Their attitude towards Darvish was likely compromised by inexact translation. When A-Rod went off about how Yu was managing his own rehab and how other guys lost respect for players that did that (told the team they weren't ready to come back), the national spotlight briefly landed on the troubling situation with their blockbuster free agent signing. They needed a new guy when they announced he wouldn't be back at all.

Enter Cole Hamels. The Cubs briefly flirted with Hamels a couple years back, perhaps around the time they signed Lester. They didn't get him for whatever reason and maybe if they had, they might have had a better shot in 2015 and 2017, but it doesn't matter--they got him when they needed him and he came to play. He would get an A or A+. Lester would also get an A. Hendricks would get an A-. I don't know why he got brought in during the 12th or 13th inning of the wild card game (to be honest I was having a smoke break due to stress when that change was made) and I don't question it so much as wonder what happens if Hamels stays in. I don't blame him for the loss at all. Quintana I would give a B+, almost an A-. Chatwood would get a D+ or C- (because he was still relatively effective in spite of his outrageous number of walks). Montgomery would get an A for his first 5 starts in the rotation and a B+ thereafter. He was just stunning when he first got the nod to start. He showed up like he wanted to compete for a Cy Young. Then he went back down to earth. Morrow I would give an A, Jesse Chavez was a great late-season move, also an A. De La Rosa in similar territory but B+. Strop I would give an A. Cishek overused, B+. Kintzler was not good, C+. Mixed feelings on Justin Wilson, feels like I rarely got to see him pitch (maybe that means he just got the job done), B+. Probably missing a few.

Baez gets an A+ and became my favorite player (after Arrieta, then Hendricks). Rizzo gets an A. Bryant gets an A- (should be B+ but don't fault him for team's mistake of potentially exacerbating his injury). Contreras gets an A-. Almora gets a B+. Zobrist gets an A. Schwarber (slimmed) gets an A-. Heyward gets an A-. Happ gets a B and Bote gets a B+. Caratini gets a B-. Daniel Murphy gets an A-. Russell gets a B-/D (B- player (A on defense)/D as person depending on DV investigation). La Stella gets a B- for being a great pinch hitter. Probably leaving a few out.

This year I watched the team more and paid closer attention to them than I had ever before (though I only went to one game in person). My take is that Maddon deserves an A for managing them to a 95 win season and a tiebreaker game for best record in the national league with the upstart Brewers. Rumors are already swirling about Maddon being on the hot seat and I just want to say, stop that. I disagree with a few of his decisions in the wild card game but on the whole, on balance, he knew what he was doing with this team and steered them toward phenomenal success in spite of a multitude of very challenging situations. I don't see Theo & Jed losing faith in Joe just yet and as sad as everyone must be right now, I think we all remain optimistic about the shape of the team going into 2019 and will watch the off-season decision making closely.

The team limped into the postseason, incredibly burnt out from playing about 35 games in 37 days. They looked like they did last year in the NLCS. They could barely get a hit. Still, they stayed in it til the end. Fantastic wild card game and kudos to both the Brewers and Rockies for their victories, which they deserved. Cubs fans can afford to be charitable. Everyone could tell it was going to be a longshot this year, just as it was last year, and though they had their earliest exit yet, it was arguably more impressive than last year. We will now have to wait out a cold, lonely winter, but they will remain an exciting team to watch next year, and hopefully for several more (6?) to come.
Posted by JK at 8:51 PM No comments: