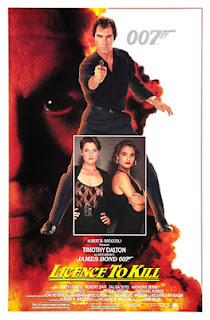 Licence to Kill (1989)
Dir: John Glen
A Gritty Film for a Gritty Bond
By Jay Maronde


John Glen’s final entry into the Bond Canon could easily be one of the most violent and divisive James Bond Films ever produced for two reasons. First, Timmy Dalton had already shown that he wanted to play Bond in a very different, much more gritty way. Second, Producer and Broccoli family member Michael G. Wilson wrote most of the movie because the Writers Guild of America was once again on strike. These two factors contributed to this very gritty entry into the Canon, which leaves everyone to wonder what would have happened had the franchise continued with this director/ actor pairing.


The first thing I want to mention about this film is that the villains are extra fucked up and crazy. Robert Davi plays Franz Sanchez, the biggest of the big-time South American drug lords, and he is fucking awesome. Sanchez is so evil he doesn’t kill his enemies; he feeds them partially to sharks and lets them live so that he can enjoy their suffering. He also is more than willing to travel to America (where he is under indictment) and risk arrest, exclusively for the purpose of recapturing his escaped girlfriend (the radiant Lupe, played by the beautiful Talisa Soto) and beating her (but only after cutting her new boyfriend’s still-beating heart out of his chest (which he later refers to as his little valentine). This is where the film opens. James Bond and his old friend Felix Leiter are on their way to Leiter’s wedding in Key West when the Coast Guard flies over, stops the limo motorcade, and enlists Bond and Leiter to capture Sanchez. Felix Leiter in this film is once again played by David Hedison of Live and Let Die fame, making him the first actor to reprise the role of Felix. Leiter advises Bond that he is only along on the adventure in an observatory position, but Bond jumps out of the Coast Guard chopper and literally hooks the tail of Sanchez’s escape plane, dragging him back into American airspace and a waiting jail cell. Bond and Leiter then parachute into the wedding, making for one of the most positive James Bond pre-credits sequences.* After this moment however, the film gets progressively darker.


After the credits, the song for which is sung by Gladys Knight and isn’t that great but is very catchy, we are returned to the duel scenes of Leiter’s happy wedding and Sanchez’s unhappy (yet remarkably calm) interrogation. Then in a plot twist which was completely ripped off by the 2003 Samuel L. Jackson action flick S.W.A.T., Sanchez offers 2 million dollars to anyone who will spring him from the clink. Of course there’s a dirty cop who takes the cash, and he gets his later as Bond feeds him to a shark. But Sanchez escapes, and sends his goons after that CIA guy who arrested him, our old friend Felix Leiter, who is literally carrying his new wife across the threshold as the goons show up. Here we get our first view of a great young actor who was cast because he was weird and creepy but not too much. This young actor is Benicio Del Toro, and he is fantastic, like easily one of the best Bond Henchmen ever, and he is actually the only Bond henchman ever to win an Oscar. Later on in the film right before Sanchez feeds only part of Leiter to a shark,  Dario (played by Del Toro) remarks in the creepiest way ever that he gave Leiter’s wife “a nice honeymoooon”  (YOUTUBE LINK, http://youtu.be/r5rUWO1ZUQA , BAM!) implying that they raped her before killing her. This is the first rape I can remember from the entire Canon so far, further adding to this film’s almost surreal grittiness. Clearly this upsets James Bond greatly and he begins his plans for revenge. Unfortunately, M wants him to go to Istanbul and solve other more pressing British problems. Bond refuses, resigns, and then is forced to escape from MI6 custody, as clearly being a super spy isn’t really a job you are allowed to just quit.


With the help of Former CIA pilot Pam Bouvier (played by the ultra-lovely Carey Lowell (who is one of my favorite Bond girls exclusively because she later became an ADA on “Law & Order”) Bond escapes America, and travels secretly to South America to confront Sanchez on his home turf. Bond deposits a ton of Sanchez’s own money (which he stole) in Sanchez’s Bank, and then heads to Sanchez’s casino to play a quick game of no limit card counting. Personally, Bond blatantly counting cards could be one of my favorite James Bond casino scenes in the entire Canon, and it definitely works perfectly for Bond’s purposes of having a face-to-face with Sanchez. The two meet, Bond tells Sanchez that he is an unemployed assassin looking for work, which is shocking because it’s actually true. The two eventually become associates before Dario blows the whistle while they are all at Sanchez’s secret cocaine processing facility which of course Bond burns to the ground before escaping. Bond then chases down Sanchez and eventually lights the gasoline soaked villain on fire using the lighter that the Leiters gave him as a gift for being the best man at the wedding.


Also worth a mention in this film are Desmond Llewelyn as Q in his biggest role ever, covertly helping Bond, acting almost as if he’s a field agent when officially he’s only on vacation in South America (Moneypenny arranged this particular vacay without M having any knowledge), and the Great Wayne Newton. Both of these characterizations have unique back stories. First, this was supposed to be a Bond film where Bond takes out Noriega. Unfortunately the British have no jurisdiction over South American leaders which is why Bond quits before running off to settle this score. The producers didn’t want the movie to not feature Q branch but how would an expatriated James Bond be receiving his standard help other than to have Q covertly helping of his own accord, so for many parts of this film Q is almost Bond’s sidekick. The Wayne Newton appearance is far more amusing as Newton had always wanted to be in a Bond film so he wrote the producers and nicely asked if they could make it happen. Originally he was given a very small part but after the production team got him in front of the camera his role was greatly expanded to what we see today as the final product.


Licence to Kill is certainly not the best of all Bonds and certainly wasn’t the most profitable films of that era, but it is quite gritty and is the exact type of film that Timmy Dalton should be the star of and therefore the movie is definitely worth a viewing.


*Apparently the opening sequence in The Dark Knight Rises pays homage to this one.  -JK
Posted by JK at 1:57 PM