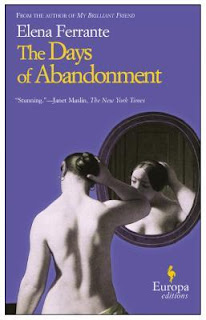 About a year ago, after seeing Suicide Squad, my longest-time friend started talking about this Italian author who wrote under a pseudonym, raving in particular about her novel concerning a woman being left by her husband.  I forgot the name of the writer--but there were enough details to remember (female, Italian, pseudonym) that I could piece together who she was.

I finally got around to picking up The Days of Abandonment in late June, and took it with me on a recent trip to New York.  Just as we were landing in New York, my seat neighbor inquired if the book was good, and I recited the above regarding the recommendation.  He told me he had read My Brilliant Friend and the other trilogy.  I told him I was surprised it was published in 2002, but that I hadn't heard of it until now.  He said he thought it was because Hollywood had come knocking.

The Days of Abandonment is a first-person narrative from the perspective of Olga, a 38-year-old mother of two (Gianni and Illaria), recently left by her husband, Mario.  To get more detailed, Mario leaves her for a younger woman, the identity of whom is unexpected, and sort of obvious at the same time.  Olga basically falls apart, and the novel is about her going crazy.  It culminates in a sort of nightmare day from the hell, after which she gains some form of clarity on her situation.

Ultimately, it is a very satisfying novel, and sprinkled with that sort of European attention to detail and simplicity of style that feels effortless.  The opening line is a perfect example, immediately reminiscent of another European master (Camus):

"One April afternoon, right after lunch, my husband announced that he wanted to leave me." (9)

Okay, that is not nearly as simple as the opening of The Stranger, but that same sense of the immediate impact of sorrow is struck.  The novel takes the shape of 47 relatively short chapters of varying length, which feel more like sketches of scenes.  It seems to take place over the course of six months, but the primary action in the novel is the day that comes right around month four (Saturday, August 4th), chapter 18 - 34, pp. 88-151.  A great deal of this section has to do with the locks on the front door.  She manages to lock herself and her family inside of their apartment because she cannot undo the locks.  She has a special set installed, with two keyholes that have to be turned just right.  As a person that has had to call a locksmith to get into his apartment after his key broke off in the door, at least once, maybe twice, I could identify highly with this section.  However, it goes a little bit too far!  Here is one example I randomly flipped to:

"But I knew immediately, even before trying, that the door wouldn't open.  And when I held the key and tried to turn it, the thing that I had predicted a minute before happened.  The key wouldn't turn.
I was gripped by anxiety, precisely the wrong reaction.  I applied more pressure, chaotically.  I tried to turn the key first to the left, then to the right.  No luck.  Then I tried to take it out of the lock, but it wouldn't come out, it remained in the keyhole as if metal had fused to metal.  I beat my fists against the panels, I pushed with my shoulder, I tried the key again, suddenly my body woke up, I was consumed by desperation.  When I stopped, I discovered that I was covered with sweat.  My nightgown was stuck to me, but my teeth were chattering.  I felt cold, in spite of the heat of the day."  (117)

She has a new set of locks installed after a set of earrings from Mario's grandmother go missing.  She has a vaguely unpleasant, vaguely sexual experience with the two men installing the locks, particularly the older of the two.  The book is filled with such vignettes.  Her complicated feelings about herself as a sexual being culminate in an encounter which ends up becoming an unlikely, ambivalent romance.

Her relationship with the family dog, Otto, is also worth comment.  Otto is arguably a bigger character than either of the children, because she feels more saddled with him than the children.  It seems as if Mario was the one to get him, but does not take him with him, and she resents the additional responsibility.  But as always tends to happen, she develops a bond with the animal--however, not before a somewhat shocking incident in the park following another woman's reproach after he scares her and her baby:

"When he didn't stop I raised the branch that I had in my hand menacingly, but even then he wouldn't be silent.  This enraged me, and I hit him hard.  I heard the whistling in the air and saw his look of astonishment when the blow struck his ear.  Stupid dog, stupid dog, whom Mario had given as a puppy to Gianni and Ilaria, who had grown up in our house, had become an affectionate creature--but really he was a gift from my husband to himself, who had dreamed of a dog like that since he was a child, not something wished for by Gianni and Ilaria, spoiled dog, dog that always got its own way.  Now I was shouting at him, beast, bad dog, and I heard myself clearly, I was lashing and lashing and lashing, as he huddled, yelping, his body hugging the ground, ears low, sad and motionless under that incomprehensible hail of blows.
'What are you doing?' the woman murmured.
When I didn't answer but continued to hit Otto, she hurried away, pushing the carriage with one hand, frightened now not by the dog but by me." (54)

There could be many more things to say about this novel, but I don't believe in spoiling several of the smaller details.  For example I found this feature in the New Yorker by James Wood which covers much of the same ground of this review, but divulges a few more details.  It is also probably much better written because it was composed and edited as part of a day job, rather than a hobby masquerading as an entryway into the limited commercial landscape of art.  Suffice to say, sometimes spoilers are necessary to explain my estimation of a novel's worth, but I think the halfway point of a story is (generally) a fair boundary.  It spoils nothing to say however, that anybody who has ever been dumped or left to their own devices--especially those left in Olga's unfortunate position--will find some measure of solace in this work.  Regardless of one's perspective, there is great humanity and truth within it, and a likely catharsis for the reader.
Posted by JK at 5:11 PM